The weather in Passeiertal and South Tyrol!

Today: In the South quite sunny, in the North changeable conditions Sunny weather towards the South with some harmless clouds. Cloudy in the northern parts of the region with Föhn winds. In the afternoon from 3° in Toblach and 11° in Meran.

Tomorrow: Snow in the North 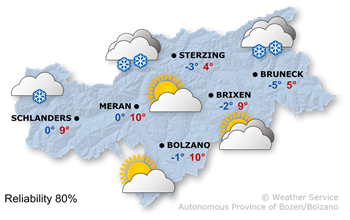 Snow on the main Alpine crest with focus on the Ahrntal mountains. In the evening, the precipitation may spread a little further to the South, for example to the Pustertal valley. Elsewhere it will remain dry with Föhn winds in the North. Maximum temperatures between 5° and 10°.

Next days Weather forecasts: More snow in the North